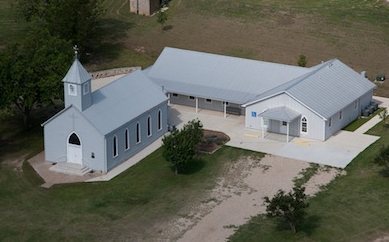 Rejoicing over 110 years of blessing

It was November 9, 1883, when a group of men met to organize a new congregation and St. Paul Lutheran, Cave Creek came into existence. Mr. Conrad Herbert donated land for a church, parsonage, and cemetery. In February of the following year Pastor Michael Haag arrived to become the congregation's first Pastor.

In 1889 St. Paul Lutheran Mission, Cave Creek became self-supporting with a baptized membership of 309. The succeeding years saw needed improvements and additions to the property. In 1891 the church was enlarged. In 1928 the chancel was added and in 1938 new church pews and the statue of Christ dedicated.

1967 saw the beginning of the installation of our beautiful art glass windows as well as the Historical Market honoring St. Paul Lutheran as the oldest rural church in Gillespie County.

In preparation for the 100th Anniversary of the congregation in 1983, major remodeling had taken place in 1981 and 1982.

The highlight of 1991 was the illuminating of the exterior of the church with tiny clear Christmas lights, a beautiful sight that brings joy to the community and visitors.

In 1993 a Long Range Planning Committee met as much as that small group did in 1883 to look to the future of St. Paul Lutheran Cave Creek. A pictorial directory is one of the results of that committee.

We see the faces of saints on the pages and are reminded that our ministry must always focus on the people who call this congregation home. "No Longer Strangers." Eph. 2:19

On November 9th, 1883, a group of men, residing in the North Grape Creek community, later known as the Cave Creek community, in Gillespie County, met at the home of Mr. Conrad Herbort for the purpose of discussing the possibility of organizing a Lutheran congregation in the community. Most of these men, together with their families, were members of the Zion Lutheran Church, Fredericksburg, but in horse and buggy days, or even by wagon, found the distance of 10, 15, or even 20 miles almost prohibitive, and as a result were very irregular in their church attendance. There was great concern over the children when they reached the age for confirmation. The Rev. Weiss, Pastor of the Zion Lutheran Church would occasionally conduct services in the home of one of the members in the community, but that did not solve the problem. There was real need for a Lutheran Church in the community.

Mr. Gottfried Ottmers opened the meeting with prayer and all joined in the singing of hymn No. 241: "Erhalt uns deine Lehre, Herr, zu der letzten Zeit", "Preserve in fullest measure, Thy truth to us, 0 Lord".

A resolution was adopted that they proceed with the organization of a congregation and that all those who are members of the Zion Lutheran Church of Fredericksburg, and wish to become members of this new congregation, secure a transfer of their membership. The group adopted a name for the new congregation, namely: Evangelical Lutheran St. Paul Church. It was further decided to erect a church building, which was to be 30 feet long, 25 feet wide and 14 feet high with a 40 foot tower.

Mr. Conrad Herbort offered to donate 4 acres of land for the church, the parsonage and the cemetery. A few of the old records indicate that the gift was 5 acres.

A Church Council was elected, on which Mr. Gottfried Ottmers was to serve as Elder and Mr. Adolph Quindel as Trustee, for one year each, and Mr. John B. Olfers and Mr. August Klett, as Trustees, for two years each. The Presiding Officer and the Secretary were to be elected from those attending the meeting were not necessarily to be members of the Church Council.

Pledges were received for the new church building. The 21 men present for the first meeting pledged a total of $415. An additional $19 was received from "Friends".

Mr. L. Gardner was engaged to serve as the stone mason for the foundation of the new church.

The minutes of the first meeting were signed by 10 men, even though there were 21 men in attendance. Those signing the minutes were C. Horbort, H. Herbort, G. Ottmers, W. Althaus, Chr. Althaus, H. Behrens, E. A. Grobe, A. Klett, and H. E. Vollmer.

A second meeting was conducted on November 18th, 1883, at which the Constitution, as recommended by the General Council, was adopted. The Church Council was asked to serve as the Building Committee. The minutes of the second meeting were signed by most of those who had signed the minutes of the first meeting and in addition there were two new names, namely: L . W. Althaus and John B. Olfers.

A third meeting was conducted on December 28th, 1883, at which the Constitution was read and again adopted and then signed by those who wished to become members of the congregation. The minutes of the third meeting were signed by many of those who had signed the minutes of the first two meetings and in addition there were four new names, namely: Ed. Saenger, V. Boldt, L. Stahl, and L. Gardner.

A total of 16 different names had thus far been attached to the minutes of the meetings and the name of A. Quindel, who had been elected as Trustee, had never appeared. In 1884, 3 additional names appeared, namely: Wm. Saenger, August Prochnow, and A. Rode, and to the minutes of the meeting of January 1, 1885, the name of V. Haberkorn was attached.

At the meeting on December 28th, 1883, the following volunteered to haul the lumber for the new church building: Wilhelm and Heinrich Herbort, Chr Althaus, A. Quindel, Ludwig Stahl, Heinrich Behrens, and Wilhelm Ottmers. The lumber had to be hauled from Austin by mule team, a distance of approximately 75 miles.

The new congregation was in need of a Pastor. A request was therefore directed to the Rev. H. Merz, President of the Texas Synod.

The next meeting of the congregation was held on February 2nd, 1884, and it was then decided that the construction of the new church building should begin on February 11th and that Mr. Peter Schandua be engaged as the carpenter.

The congregation was now anxiously awaiting a reply from the Rev. H. Merz, President of the Texas Synod. Mr. Gottfried Ottmers had offered to givefree room and board for 6 months to the Pastor, if he should be a single man. 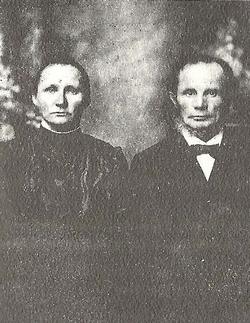 A letter from President Merz arrived and listed the name of the Rev. Michael Haag. The Congregation immediately issued a call to Pastor Haag and in due time, received his acceptance of the call. Pastor Haag and his family moved to the Cave Creek Community on the 13th day of June, 1884. There was no parsonage, so the Pastor's family lived with the Conrad Herbort family until a parsonage could be provided.

The construction of the new church building was on schedule, so that on February 22nd, 1884, the cornerstone laying could be celebrated. Pastor Fiedler from Fredericksburg was present for this event. He also dedicated the cemetery. The congregation joined in the singing of the hymn: 'Now thank we all our God" and Pastor Fiedler preached on the words of Psalm 24.

On the 22nd of June, 1884, the new church was ready for dedication. The total costs of the church building were approximately $600. The interior was, however, not finished.

The Rev. R. Fiedler, Pastor of Zion Lutheran Church of Fredericksburg dedicated the church in the Name of the Father, the Son and the Holy Ghost and based his sermon on Verse 33 of the 6th Chapter of the Gospel according to St. Matthew. The choir of Zion Lutheran Church, Fredericksburg sang two verses of "Vom Kirchleim im Thale" (The church in the Wildwood). A large congregation was present, many of the visitors had driven from 12 to 18 miles so that they might be present for the dedication services. The church was much too small for the assembled congregation - many were standing on the outside and were listening through open windows.

The congregation invited all visitors to remain for the noon meal, which consisted of bread, butter, honey, cake and coffee. During the noon hour, the choir from Zion rendered various selections for the entertainment of all.

The Pastor of the congregation, the Rev. Haag, was in charge of the afternoon services. He preached on the Gospel Lesson for the day, St. Luke 14:16-24. The choir from Zion sang verses 3 and 4 of "Vom Kirchlein im Thale" (The church in the Wildwood) for that was a fitting memorial to Anna Marie Boldt, young daughter of Mr. and Mrs. Christian Boldt, who had died at an age of 1 year, 5 months, and 28 days and was the first to be buried in the cemetery of St. Paul Lutheran Church. We quote from verse 3 of the song which the choir rendered:

"There close by the church in the valley,
Lies one that I love so well;
She sleeps sweetly 'neath the willows;
Disturb not her rest in the vale."

Some of the older members of the congregation are of the opinion that an error had crept into the early records and that Anna Maria Boldt was not the first to be buried in the cemetery, but that Mrs. Wilhelmine Ottmers, the wife of Mr. Gottfried Ottmers, was the first one to be buried there. The official records of the church give the date for the interment of Anna Maria Boldt as March 27, 1884, and that for the interment of Mrs. Ottmers as September 22, 1884. The dates on the respective tombstones agree with the records of the church.

First Church and Parsonage
The picture of the first church and parsonage and was probably taken after 1903. An 18 foot addition was made to the church in 1890 and is shown in this picture. Pastor and Mrs. Ermlach and their child are about to leave on a visit to some of the members.