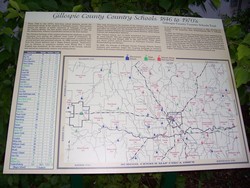 On April 4, 2009, in a short ceremony, The Friends of Gillespie County Country Schools (FoGCCS) dedicated a historic marker at the Vereins Kirche (Community Church), located at the Marketplatz (Market Square), 112 W. Main St., Fredericksburg, Texas, commemorating the rich public school history in Gillespie County. The marker depicts the 42 rural public school districts, the Harper and Fredericksburg districts, the location of school houses, and the number of teachers and grades at the time of the census. A map was prepared as a county school census and is the only known documentation of all the school districts in the county. The map is not dated and is believed to have been made in the 1920's-1930's.

The marker is permanently displayed in an area directly behind the Vereins Kirche (Community Church). This place was chosen to also honor the first public school in the county established in 1847.

Public education was promised to the settlers by the Adelsverein, The Society for the Protection of German Immigrants in Texas, and fulfilled with the first public school in the Vereins Kirche (Community Church) in 1847. The Texas Public Schools Act of 1854 encouraged the establishment of rural schools in the state and fostered the forming of school districts in Gillespie County, where the German heritage put a particular emphasis on education. The rural public school era ended with the Gilmer-Aiken Act in the mid-1950's when the last rural schools consolidated with Fredericksburg Independent School District. Today, there are three public school districts: Doss, Fredericksburg, and Harper.

The map also highlights the Gillespie County Country Schools Trail established in 2006, the only one of its kind in the nation.

For a complete listing of the 42 school districts, visit our School History page.

The ceremony was held in the Oktoberfest Hall at Market Square, followed by the unveiling of the marker. During the ceremony, former teachers and students from all the rural schools were recognized and asked to register. The public was invited and were served refreshments.

The marker dedication was part of the 10th annual Country School Open House celebration in the FoGCCS' effort to preserve rural schools in Gillespie County. It was followed by an open house at Grapetown, Lower South Grape Creek, Luckenbach, Meusebach Creek, and Williams Creek (Albert) schools.

Our thanks to Kathy Harrison and the Hill Country Education Foundation who were major supporters for this project.