In 2001, former students got together and formed the Nebgen Community Club and started the process of renovating the property and clearing the cedar. The Club meets quarterly throughout the year for a social.

To schedule a visit or tour when the school isn't conducting a scheduled open house, call the Nebgen rental contact person below or complete our Contact Us form and select Nebgen School from the dropdown. Include the date/time of your request along with details. 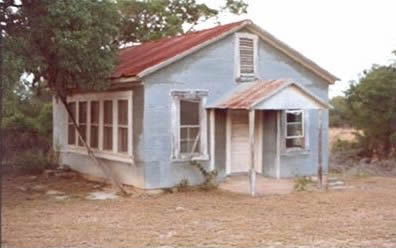 A brief history of Nebgen School

Built in 1936. Consolidated in 1949. One of the four schools that has a pavilion and stage. It was used for "school closings", a community activity celebrating the end of the school year. In the morning was the "Schulprüfung", an oral and written "school exam ". In the afternoon, there were games, and in the evening, the adults put on a play followed by a dance. The men cooked BBQ, which was sold by the pound, and families would bring their own side dishes.

Nebgen School District #33 was located near the Gillespie and Blanco County boundaries. In 1881, the first school, made of logs, was built on land donated by the Truman Taylor family. It was called Smith Valley School. In 1901, another school was built 150 yards from the first and named Lindemann School, since the Lindemann family had the largest number of children enrolled. Several years later, it was renamed Nebgen School.

The Nebgen School was rebuilt in 1936. The one room, frame building had an embossed tin exterior, a tin roof, a stone chimney, one door, and many windows. The north interior wall was covered with blackboards. The water supply came from a cistern. When electricity later came to the community, lights replaced the gas or kerosene lanterns. Lessons were taught from 9 a.m. until 4 p.m., and students brought their lunches from home. They also provided janitorial services.

A common feature in the Gillespie County schools was the "Schulprüfung", a school examination held publicly at the close of the school year. The exam was announced several weeks ahead of time. On the specified day, children, parents, and friends, dressed in their finest, gathered at the school. It was an all day affair, with evening festivities going far into the night. As was the custom, a guest teacher conducted the exam. It was also expected for this teacher to decline. Usually, an arbor was constructed outside the school and benches were set up. Each class had its turn in every subject, and most of the examination was oral, except for arithmetic, which was done on slates and shown to the guests. After the exam, a program was given by the students. At dusk, the school room was converted into a ballroom and dancing began.

A choir of 12 was organized in 1935, bringing togetherness and enjoyment to the community. In 1949, this school was consolidated with the Stonewall Independent School District. In 1946, a community club was organized and named "The Nebgen Bee Community Club". The club remained active with 40 members until 1990. Today, the school is badly in need of preservation to again show its importance to present and future generations.