To schedule a visit or tour when the school isn't conducting a scheduled open house, complete our Contact Us form and select Junction School from the dropdown. Include the date/time of your request along with details. 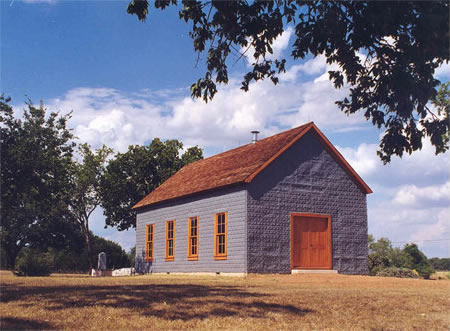 A brief history of Junction School

Built in 1911. Consolidated in 1947. On April 11, 1965, President Lyndon B. Johnson returned to his school and asked his first teacher, Ms. Kate Deadrich, to witness the signing of the Elementary and Secondary Education Act. It was one of more than 60 education bills he signed that committed more than $1.5 billion in Federal funds to public education.

Throughout the world, the dream of many parents is a good Lyndon Baines Johnson education for their children. To help fulfill this dream in rural America, a number of one-room schools were constructed. One of these schools was the Junction School, located on the banks of the Pedernales River. The original Junction School opened its doors to students in the school term of 1882-1883 on the Christadelphian Camp Ground. The wooden structure, with a gabled roof, served as both a church and a school until 1910. It served exclusively as a church from 1910-1922. In 1922, the original church/school building was torn down and a new church was built in its place.

In 1910, John Pehl sold the school trustees 2¾ acres on the banks of the Pedernales River to construct a new one-room Junction School. The school term of 1910-1911 opened in the new school with 46 students in attendance. Miss Neil Murphy was the teacher. Over the next 37 years, the Junction School served the community, teaching children the basic skills needed for a good education. In 1947, the Junction School was closed and consolidated with the Stonewall School.

One of the students who attended the Junction School was Lyndon Baines Johnson, who later became a teacher and then our 36th President of the United States. As president, Lyndon Johnson signed the Elementary and Secondary Education Act on April 11, 1965, at the Junction School with his first teacher, Miss Katie Deadrich, at his side. This law continues to have a major impact on education today. Upon signing the act, President Johnson stated, Education is the only valid passport from poverty.