History of Education in Gillespie County 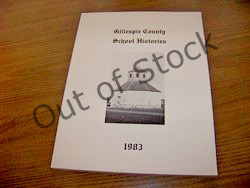 The following 12 schools comprise The Friends of Gillespie County Country Schools. The information on the individual schools references any current standing structures on the school property. Some original schools were washed away with floods and new ones built on higher ground. Some were outgrown and bigger ones built, etc. So the original (or first) schools might have been built earlier than noted. The Gillespie County School Histories book is a treasure trove on the history of each of the properties.

(taken from the 1892 school district map)

*Thirteen of the historic schools are listed in the National Register of Historic Places and, according to Bob Brinkman at the Texas Historical Commission, Gillespie County has more rural schools listed than any other county in Texas.

As many as 44 rural schools were in operation around Fredericksburg, the county seat of Gillespie County, in the early 20th century. German immigrants had poured into the area that became known as the Texas Hill Country in the mid to late 1800's, starting with the settlements of New Braunfels in 1845 and Fredericksburg in 1846.

These Germans brought with them a keen love of education. The first school in Fredericksburg was erected in the Marketplatz (Market Square) in the center of Main Street in 1847. This Vereins Kirche (Community Church), known as the Church of the Society of Nobles, was to serve as church, school, community meeting hall, and fort, if needed. Comanche Indians roamed the area. The Germans had reached the frontier of Texas before the United States Army.

As families moved onto land more distant from town, the earliest rural educational efforts normally involved hiring a teacher to educate the children in private homes. Eventually, land was donated by a family in the area, and a community school was built, taking names descriptive of nearby natural landmarks, such as Cave Creek, Crabapple, Pecan Creek, or Lower South Grape Creek. The German heritage of Gillespie County is evident in other names like Luckenbach, Meusebach Creek, Rheingold, and Nebgen.

Several of the 12 schools now listed on the National Register date from the 1870's and 1880's. The original Rheingold School is the oldest of the rural schools in Gillespie County.

Many of the Gillespie County rural schools offered courses in both in German and English. The end of the school year was celebrated with an all day affair called the Schulprüfung (school examination). The students demonstrated their knowledge in front of family and friends, followed by a picnic and dancing into the night. The original school closing curtain is still on display in four of the schools, with advertisements for early-day Gillespie County merchants. Three of the schools still have the original student desks and teacher's desk.

The End of the Rural School Era

The Gilmer-Aikin Law of 1949 resulted in the consolidation of most rural schools in Texas, bringing a close to this era of public education.

Some of the schools eventually were adapted as private residences, while two became interpretive pieces. The White Oak School was moved to the Pioneer Museum Complex located at 309 West Main Street in Fredericksburg. It offers a glimpse on a daily basis of the inside of one of the rural schools, complete with desks and the teacher's bell. There is an admission charge to the museum.

The one-room Junction School, located in the LBJ National Historical Park at Stonewall, is part of the National Park Service interpretive tram tour. It was first attended by President Lyndon Baines Johnson at the age of four. You can participate in an LBJ Park Tour for a fee or drive directly to the school house.

In the 1950's, community clubs were organized, maintaining some of the rural school properties in Gillespie County using their own funds, although they were owned by the Fredericksburg Independent School District (FISD). With a strong sense of community in the rural areas of Gillespie County still strong today, 14 of the schools continue to be used as community centers, social gathering halls, and polling places. These 14 schools can be rented by the public for social activities. Visit our Rent a School page for reservation contact information.