The first community club was organized in 1960. It includes third and fourth generations of former students and neighbors. The Club meets quarterly throughout the year for a social. The restored building is used for weddings, reunions, meetings, and other community activities. 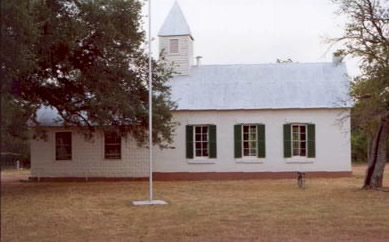 Built in 1901. Consolidated in 1960. On holidays, such as Washington's Birthday, Thanksgiving, and Christmas, students presented programs. All parts were memorized and families and the community were invited. Christmas plays were held inside this school with the front area having a curtain, and the students using a side window for the entrance and exit. Santa Claus handed out oranges, apples, and candy, and lit the candles on the Christmas tree. One year his beard caught on fire. He quickly exited through the window and headed for the well.

The need for a better, more accessible school arose, so in 1900, the trustees sold the original land and bought an acre from Charles and Martha Ahrens for $5. This site was located less than 1½ miles north along Grape Creek and next to the Austin Highway. The new, cut limestone block, single room schoolhouse was completed in 1901. It had a tin roof with a bell tower on the east end and a chimney on the west end. In later years, a large porch with a concrete slab was added. Through the years, the finer things in life were added, including electricity, a new well and pump, drinking fountains on the porch, and new modern restrooms that replaced the old outhouses. The last year classes were held in this little country schoolhouse was 1960. Due to low enrollment, the trustees voted to consolidate with the Fredericksburg Independent School District.